Whenever AIDS has won, stigma, shame, distrust, discrimination, disgust was on its side. Every time AIDS has been defeated: it has been beacuse of trust, openness, dialogue and clear communication. We are ultimately humans and solidarity is our virtue. We need to choose which side we are on, in this deadly deal….(Michel Sidibe, Executive Director of UNAIDS)

This WORLD AIDS DAY (1st December), let us look at an unspoken angle of this deadly illness: The STIGMA and DISCRIMINATION that it brings about.

Since 1981 when the illness was first reported till date, HIV has claimed millions of lives worldwide. With the advent of improved drugs and HAART therapy, more and more individuals are living through with this illness. But alongside the physical outcomes and side-effects of the drugs, comes another social evil: that of stigma and shame associated with the illness that leads to grief, isolation, discrimination, depression and high suicidality. This significant social burden on HIV patients are further compounded by numerous myths and misinformation. As a result, around 20-30 percent detected with the illness shy away from adequate medical care, costing the lives of many young people.

Few key points in this regard are:

In 35 percent of the HIV population in developing countries, prejudice, negative attitudes and beliefs form a barrier to adequate health-care utilization. Even in today’s globalized era aided by technology, the affected populations are shunned by their near ones and society at a large due to the prevalent myths limiting their access to treatment and other service provisions. This affects already marginalized populations like injectable drug abusers, commercial sex workers, homosexuals and transgenders and the homeless. These are the specially vulnerable population who need special care and are more susceptible to the physical and psycho-social burden of HIV/AIDS.

The most prevalent FALSE BELIEFS are:

(REMEMBER, THESE ARE FALSE AND HAVE NO SCIENTIFIC BASIS)

Based on the International Centre for Research on Women (ICRW) report in 2016, the possible consequences of HIV-related stigma are:

HIV-related stigma and discrimination exists worldwide, although it manifests differently across countries, communities, religions and individuals. In Sub-Saharan Africa and India where sexual contact is a major source of HIV spread, infidelity, sex work and homosexuality are the major foci of discrimination and debate.The key affected population in the developing countries are commercial sex workers (CSW), men who have sex with men (commonly referred to as MSM), drug abusers and young homeless women.

The United Nations Development Programme (UNDP) in 2010 provided a stigma-sickness slope model. Based on that the demographic factors of HIV and AIDS (sex work, sexuality, drug abuse, gender, residence, socio-economic status) interact with the ‘sickness factor’ to generate stigma and mediate ‘social marginalization’. The issues involved are:

The affected people are increasingly isolated, not only from society but from their own families and services that can potentially protect them, In 2016, a major European study showed that 60 percent of trained medical professionals have negative and discriminatory study towards homosexual men with AIDS and drug abusers. In India, a study by the All India Institute of Medical Sciences (AIIMS), Delhi in 2017 showed that 40 percent of resident doctors have uncertainty and fear in mind while treating HIV positive cases and are resistant to examine them physically while medical examination. The above-mentioned vulnerable populations account for more than 70 percent of HIV infections in the South-East Asian countries but unfortunately utilize less than 30 percent of the AIDS CONTROL AND PREVENTION services. Moreover, the transgender and prison populations are 50 times more likely to develop HIV-related complications due to neglect and stigma.

How Stigma affects the HIV response?

UNAIDS and the World Health organization (WHO) cite fear of stigma and discrimination as the main reasons why people are reluctant to get tested after an accidental exposure, or are reluctant to disclose their status or take the anti-retroviral (ARV) drugs. This contributes to the global epidemic of HIV and the higher number of AIDS-related deaths. The treatment is delayed with untimely complications and mortality. Research states that CD4 cell count ( a major marker of the status of HIV infection) falls with social isolation, discrimination and depression with the increase in opportunistic infections, one of the major causes in HIV-related deaths. People even shy away from using the counselling services from HIV, safe needle practices (for drug users), contraceptives and barrier methods: all of which prevent this deadly disease.

The epidemic of fear, stigmatization and isolation has undermined the ability of individuals, families and societies to protect themselves from this deadly epidemic and reassure those who need help. This social evil of stigma against HIV needs to stop soon, before it hinders the prevention programs and policies.(National AIDS Control Organization, 2015)

The various forms of existing stigma are Self (or internalized) stigma, Governmental or institutional stigma, Restrictions of travel or entry, healthcare stigma (the MAJOR BARRIER), employment stigma and community/household level stigma. Each of these have their own unique dynamics and challenges that can potentially be prevented at the root levels.

SO WHAT CAN WE DO ABOUT IT?

Prevention is always better than cure, as the old motto goes! In March 2016, UNAIDS and WHO’s Global Health Workforce Alliance launched the Zero Discrimination in Healthcare. This works towards a world where ideally everyone, everywhere is able to receive adequate health-care, irrespective of the diagnosis and the demographic status. This is in line of the UNAIDS vision and the Millennium Development Goals (by the WHO). This focuses on addressing discrimination in healthcare, workplace and education settings.Though far from practical, this forms a guideline for the community awareness programs and Government initiatives in various countries to end HIV-related stigma. The last decade has seen a reduction of more than 50 percent in the HIV infection rates in India. It is time, we see similar results in the psycho-social outcomes and quality of lives in the HIV-affected population as well. All forms of media, the policy-makers and the health-care providers need to work in unison to defeat this social evil targeting the work-place, educational set-ups and community, inclusive of the vulnerable population. Adequate sex-education and gender-education from the early school days has a huge potential for healthy sexual life and HIV/AIDS prevention. Busting the selective myths as mentioned above might add to the public-awareness campaigns.

An effective response to the HIV epidemic must tackle the root cause of stigma and ensure that quality services are inclusive, affordable and accessible. We need to:

This deadly illness has paramount physical and social consequences. A large number of National Programs are targeting this illness, based on the Universal Declaration of Human Rights. I urge all the readers to help implementation of the process. Basic awareness spread at the grass-root level with example setting can help immensely. Even if the thought-process of an individual changes in the community, a difference can be brought about.

This WORLD AIDS DAY (1st December), besides taking pride in the new treatment strategies devised to beat the HIV virus, let us also pledge to ERADICATE the ‘virus of STIGMA within’! Help the lives life better…..

What is your take on this opinion piece? Let us know in the comments. Or do You have an opinion piece of your own on another topic related to psychiatry? Get it published here. Drop us a mail at contact@the-psychiatrist.com 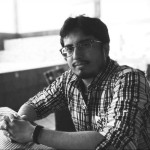 Dr. Debanjan Banerjee has completed his medical graduation from Calcutta National Medical College, Kolkata and thereafter his post-graduation (M.D.) in Psychiatry from National Institute of Mental Health and Neurosciences (NIMHANS), Bangalore. Subsequently he has worked as a Senior Resident in General Psychiatry for two years before starting his post-doctoral (D.M.) in Geriatric (old-age) Psychiatry from the same institute. He has been attached with the Geriatric unit of NIMHANS for over three years now and specializes in ageing and old-age related mental health problems (like dementia, depression, etc.).

He has several awards and distinctions to his credit (Gold Medalist in MBBS, Best Student and Psychotherapy in MD, The Gandhi Fellowship Award, etc.), and has presented in several national and international conferences. Dr. Debanjan is a reviewer of the esteemed International Journal of Geriatric Psychiatry and is actively involved in the training of post-graduates, student-counselling as well as research. His research interests include social psychiatry, stigma, old-age psychiatry, psychotherapy and qualitative methods.